Find Good In Every Day

One mom's attempt at finding good in every day of this chaotic world.

It’s been a few months, so in our house that means it is time for a new project.  Apparently we think that we don’t have enough on our plates, so we’ve decided to add basement renovation to the list.  Can’t be that difficult can it?  (I’m obviously joking!)

Last spring we got the exterior of our house painted by a great father/son construction company.  We were so impressed with their work that we decided to have them give us an estimate on finishing our basement.  (Side note: We’ve been talking about finishing it for years and have been through many different thought processes:  Total redo?  Add a bathroom?  Sump pump to solve water issues?  Etc…  At that time, we had finally decided to nix the bathroom idea and to work around the water issues since we had recently spent a lot of money to fix the biggest water problem.)  Their estimate to add a few walls, put in some recessed lighting, close-in the stairs and add a closet came to over $12,000!  We were shocked!  But it was the motivation I needed to let Jeremy do the basement himself.  Since I then knew how much money we’d be saving, I was more willing to give up weekends, be husband-less, have the kids be father-less for the time it took to get it done.  And it was under the agreement that the shed MUST be finished first!  (I won’t get into that project.)

After a very busy summer, Jeremy finally had the time to start the demo process.  And now that walls are knocked down and we’re left with a shell, it means we HAVE to finish it.  There is no going back now.

But let’s look back in time for just a minute…  (I had to go way back in time to find actual pictures of the basement.  This is another area of the house that has had many iterations, so enjoy the stroll down memory lane.)

The laundry area. This won't change a lot much to my dismay. I do hope to at least have a nice ceiling with more lighting. And it will get a tad bigger with the moving of one wall to the right. 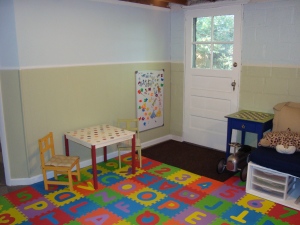 A few years ago, Jeremy and I spent an entire weekend trying to "finish" a very unfinished space for more play space. Unfortunately water started to come pouring underneath that door from the outside and caused all those awesome floor tiles to mildew. Yuck! We took it apart only 6 short months after doing it.

This picture doesn't show much except my little baby Cooper when he was actually a baby! That's how long ago these pictures were taken!

This built-in is right at the bottom of the stairs. I love the charming nature of it, but I'm more excited about what is going to go there in the renovation. A pantry! A whole new pantry just for food!! Angels will sing when this is done. 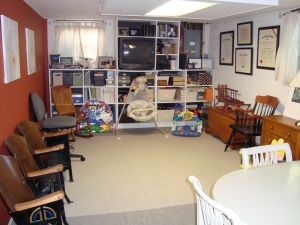 The most finished part of the basement. We installed FLOR tiles, built the bookshelves, and painted a couple of walls shortly after moving in to the house over 7 years ago. This room has been an office, a workout space, and a playroom. Once finished, it will be a den with a closet, and open to the backyard by moving a wall so it will include the door you saw in the first picture.

Looking back towards the stairs. The new wall will come off that back wall by a few feet to leave enough room for passage underneath the stairs and a little workbench area. This scenario also lets us avoid building walls right up against one of our "wettest" walls. It's never pouring in - just damp because it's a 70+ years old.

So now the waiting begins.  I was really hoping to have this all done by Cooper’s 4th birthday to facilitate an awesome birthday party space, but I don’t think we’ll get there.  I am working really hard to have patience.  I’m sure the construction company could have this done in a week.  I have to just keep reminding myself of the $12,000 estimate.  Just money in my pocket, right?  Yeah, just keep telling me that.  Please…

I’ll show more progress pics along the way, but sadly more action won’t be coming until November since every single weekend in October is booked.   I’m serious… just keep reminding me of the money I’m saving!

Thank goodness it’s Friday!  I get a whole weekend ahead with my family, and I’m not going to think about work at all.  I’m going to relish in the little moments.  I’m going to savor the laughter. 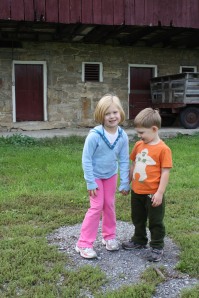 Not sure if you knew this or not, but I have a pretty awesome family.  TGIF so I can make more memories like these.

For man, autumn is a time of harvest, of gathering together.  For nature, it is a time of sowing, of scattering abroad.  ~Edwin Way Teale

I love fall.  It is, without a doubt, my favorite season.  The apple picking, the cool air, the turning leaves, the togetherness…  It seems that summer and winter are the seasons where we hole up in our own little lives – whether inside to stay warm during the winter or inside to stay cool during the summer.  Little plans are made or too many plans are made that keep us busy and away from family and friends.  But spring and fall are the seasons where everyone is ready to emerge from their cocoons and greet the world again.  We have been staying busy this fall so far with many get-togethers and a lot of family fun. 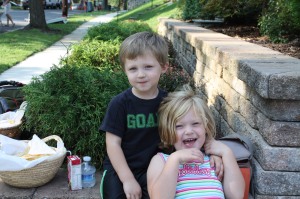 Block party with friends. Wish it were our block, but we just crash another friend's block party instead. 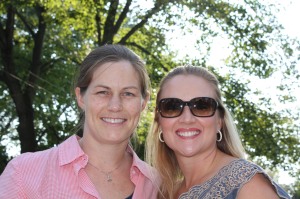 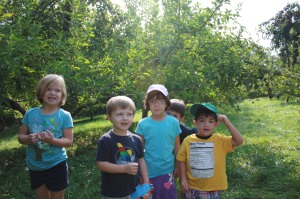 Wouldn't be fall without an apple picking adventure with the Cramers! 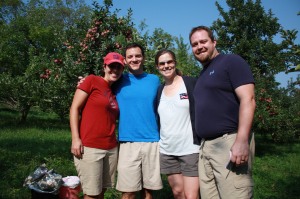 With Mason as our default photographer, we get more grown-ups in photos now. 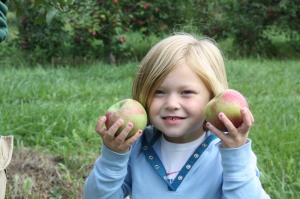 As if we didn't already have enough apples, we had to take advantage of the free ones at Jerry's orchard!

Cooper ate 4 apples in a 2-hour time period. Needless to say, he didn't eat much of his dinner. 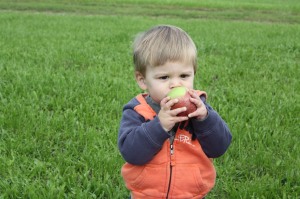 Hayes watched the big kids do it and had to try it out for himself.

This old tractor was quite the highlight for the kids! 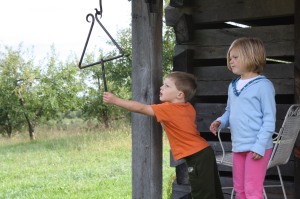 We’ve had some perfect fall weather and the perfect fall activities to go along with it.  I’ve baked an apple crisp and an apple pie.  I’ve eaten spice cake.  I’ve been using the crockpot again for hearty meals.  I’m itching to bake.  We’re watching a lot of football.  I’m pulling out sweaters.  I’m cozying up in my pajamas at night.  We’re keeping the windows open to get the fresh cool air inside that allows us to snuggle underneath our covers in bed and never want to leave.  These are just some of the joys of fall.  No wonder it’s my favorite season!

Parenting Lesson #847 – No matter how good of a parent you feel you are, your kids will tell you that you are the meanest mommy and daddy ever.

Before kids…  (heck, even just last year), if I heard a child call their parents mean or have choice words for them, I would wonder what the parent could have ever done to get their kid to speak to them that way.  Shame on me.  Just like every other parenting lesson – you never know until it’s happened to you.

No matter that we’re doing our best (which I always say is enough), we’re still failing in her mind.  I sure hope this is a phase.  I hope she’ll grow out of it.  Even if just for a few years before we reach the pre-teen and teen years.  Because I don’t know how much more I can take of the attitude and the shrugging off and the doubt that comes with raising a very insightful, smart daughter.

I know the sweetness is in there – I just only get to see it in small doses.  I guess I’ll just hang on to those small doses to get me through.  Because we have to always remember Parenting Lesson #1 – You WILL make it through this.

Labor Day weekend has become one of my favorites – something I really look forward to.  Not only does it mark the beginning of fall (which is my favorite season), but it also marks the running and/or walking of the Charlottesville Women’s Four Miler!  My mom, my aunt and my sister’s mother-in-law (third grandmother to my own kids), converge on my sister’s house in Charlottesville for a weekend of fun…  families included as well, of course.

I think this is the fourth year I’ve run it.  It was our second year as the FAB FIVE (although this year we were the FASCINATING FIVE due to our wonderful head-decorations made by my aunt).  Thankfully we had a beautiful morning yet again.  Running 4 miles among Virginia’s horse country with 3,500 other women is quite invigorating and inspiring.  I just love it!  (Especially when we cross the finish line ahead of our goal!)

As always when we run, my sister pushed me through.  She was my pace marker…  If I could keep up with her, I was good.  It got really hard near the three-mile mark, but we pushed ahead together and crossed the finish line together.  I love to run with my sister.  I think we’ve agreed we’re not doing another 10-miler like we did in March – four miles is good.  Maybe even a 10k, but that’s my limit!  And after this run last weekend, I promised myself to not run until I start training again in March for the Zooma 10k in Annapolis.  I just need to give my knees, my back – heck my whole body – a break!

Of course, what would the Four Miler be without our cheering squad and fans? 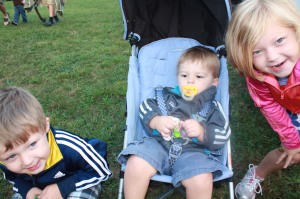 I really have no idea what goes on while I'm running. 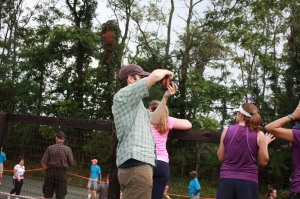 Scott trying to capture the fun.

Too bad we were just too fast for the cameras. 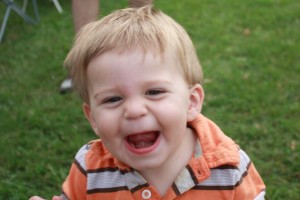 What would a trip to Charlottesville be without this guy? I'm one of HIS biggest fans!

Another successful Four Miler with the Fascinating Five!  (Did you notice the awesome headbands in the pictures above?)  I can’t wait until next year, which might be our last year since Jen and Scott are most likely moving after that.  My thought?  Make it a girls weekend – rent a house at Wintergreen and live it up with the ladies!  I think we’re on to something here.  Until we can’t do it anymore, I’ll keep racing “for the girls!”