Find Good In Every Day

One mom's attempt at finding good in every day of this chaotic world.

I’m back!!!  Ok, well, I wasn’t gone really.  Just a certain side of me was gone.  My baking side, that is.  After three months of living stove-free, I am looking forward to a truly home-cooked meal tonight (complete with rice from the stove, not one of the icky microwave packets!)  And I will top it off with cookies, of course!

This kitchen makeover has been a test of my patience.  It’s still not TOTALLY done, but I’ll get to that later.  For now, let’s bask in this milestone!

The makeover started before we even moved in.  Our goal was to do a simple makeover that would make a big impact.  Our first inclination was to paint the cabinets white, but we chose to embrace the wood since we knew they were hand crafted by the previous (and only) owner.  And they matched all the other wood in the house.  (And that tiny issue of knowing that we had a lot of other projects to get done, and painting cabinets would have taken up a big chunk of time.)  So instead we decided to change every other aspect of the kitchen.  First we removed the old stove and butcher block counters.   (We’ve saved the butcher block and hope to incorporate them into a future project.)  Jeremy redid the floor with vinyl tiles.  We got a new refrigerator.  We painted.  We tore out everything in the pantry and started over with fresh white shelves.  And we had white Quartz counters installed with a new undermount sink and new faucet.

The counter was the first hiccup.  As in all home improvement projects, it took longer than expected to get them installed.  We still moved in and lived without counters for about a week.  Not too bad in the grand scheme of things.  But like the rest of the house, once the counters were in, progress came to a halt.  I stared at this ugly lack of a backsplash for months.  Previously there had been a teal linoleum backing, which Jeremy ripped out.  He tried to get the glue off as well, but it was back-breaking work.  I quickly told him to give in to the glue and hope that the tile mortar would just get spread right over it. 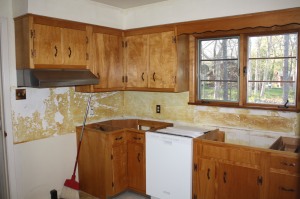 The unfinished backsplash really started bugging me about week 6.  We wanted to get it done, but we were intimidated and unsure of how long it would take.  Finally, Jeremy decided to dive in.  He was on a roll and finished most of it over two days.  It made such a difference! 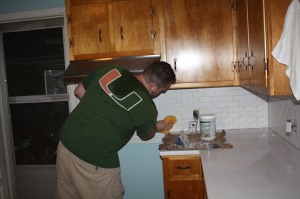 Soon after the backsplash was “finished,” we had our new gas stove delivered.  The kitchen felt mostly complete.  While we didn’t have the big gaping hole to stare at every day, we still had to wait until the kitchen was fully functioning.  It was just a continuation of the waiting game.  Waiting for the gas to be brought to our house from the street.  Last week the big day finally came!  (and the introduction of yet more work after the utility company completely tore up our yard!)  And within the past two days, they have hooked up our stove, installed our new hot water heater and our new 95% efficient gas furnace (and removed the ugly old oil tank!)  It’s been quite a busy week, but some home-baked cookies can certainly make up for it!

Without further adieu, let’s get to the before and afters… 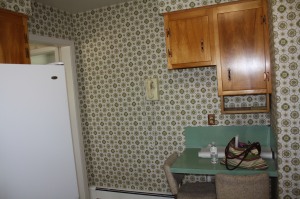 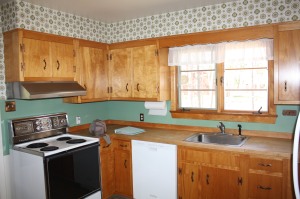 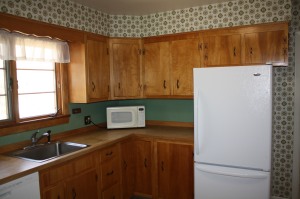 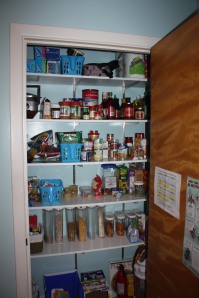 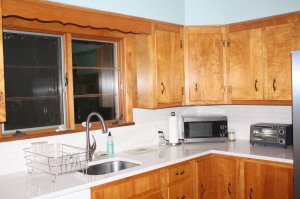 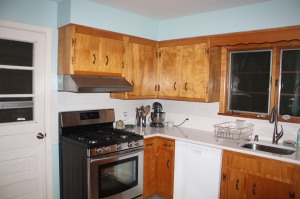 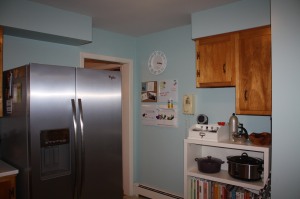 My favorite parts are the refrigerator and stove and my big pantry.  But like I said above, there are still some things to get done.

1.  Seal the grout on the backsplash.

2.  Clean the cabinet hardware or replace.

5.  Modernize or remove scalloped trim board above sink.

6.  Figure out how to accessorize or use the space above the refrigerator.  This is where I need your advice. There used to be a cabinet above, but with the new taller refrigerator, we had to remove it.  Now there is a big blank space.  What should we do with it?  Help!